Season 8 of the cult TV show, The Walking Dead exploded across our screens recently so I’ve been pondering on why zombies remain so popular in our culture.  What does our fascination with these fictional monsters say about us as individuals and as a society?

George Romero invented the contemporary zombie in his 1968 horror film Night of the Living Dead.  Previously, zombies were sorcerer’s slaves in Haitian Voodoo culture.  Romero gave them a make-over, the new undead had a strict set of rules and became a metaphor for many of our fears about modern life:- technology, conformity, contagion, consumerism, Communism, nuclear war, social breakdown, killer viruses and even ISIS.  Romero’s excellent 1978 sequel, Dawn of the Dead was shot in a shopping mall.  A small group of survivors hide out on the top floor while hordes of zombies flock below.  The film’s critique of mass consumerism is made explicit:-

[Fran and Stephen are observing from the roof of the mall]
Francine Parker: What are they doing? Why do they come here?
Stephen: Some kind of instinct. Memory of what they used to do. This was an important place in their lives.

Compared to other mythical creatures such as vampires and werewolves, zombies are not sexy or glamorous.  They are not powerful or mysterious.  No-one would ever choose to be a zombie.  I think most of our enjoyment of zombie films derives from their exploration of the theme of survival.  In all these films we see society crumble.  Violence and anarchy become the new norm.  The institutions that are supposed to protect us, such as the government, the police, can do nothing.  I believe at a unconscious level many fans of this genre derive a peculiar pleasure from seeing this happen on screen.  Many of us feel trapped in our lives, by families, by finances, by class, by ill-health, by social stigma.  We learn to live with frustration and lack of meaning.  So perhaps there is some secret satisfaction to be had from watching the stifling world of rules and routines disintegrate on screen.  Everyone becomes equal in this imaginary future.  In all post-apocalyptic films we identify with a small group of survivors who must learn to cope without the comforts of civilisation, discover their inner strengths, fighting off not only the cannibalistic zombies but other surviving humans.   Safely ensconced in our own homes this can be a cathartic experience for viewers.

The British author J. G. Ballard explored many of these issues in his novels such as High Rise and Crash.  He wrote:- “Civilised life, you know, is based on a huge number of illusions in which we all collaborate willingly. The trouble is we forget after a while that they are illusions and we are deeply shocked when reality is torn down around us.”

In Danny Boyle’s 2002 film ‘28 Days Later’ we see London reduced to a ghost town.  A group of survivors flee to the northern countryside only to find more mayhem. 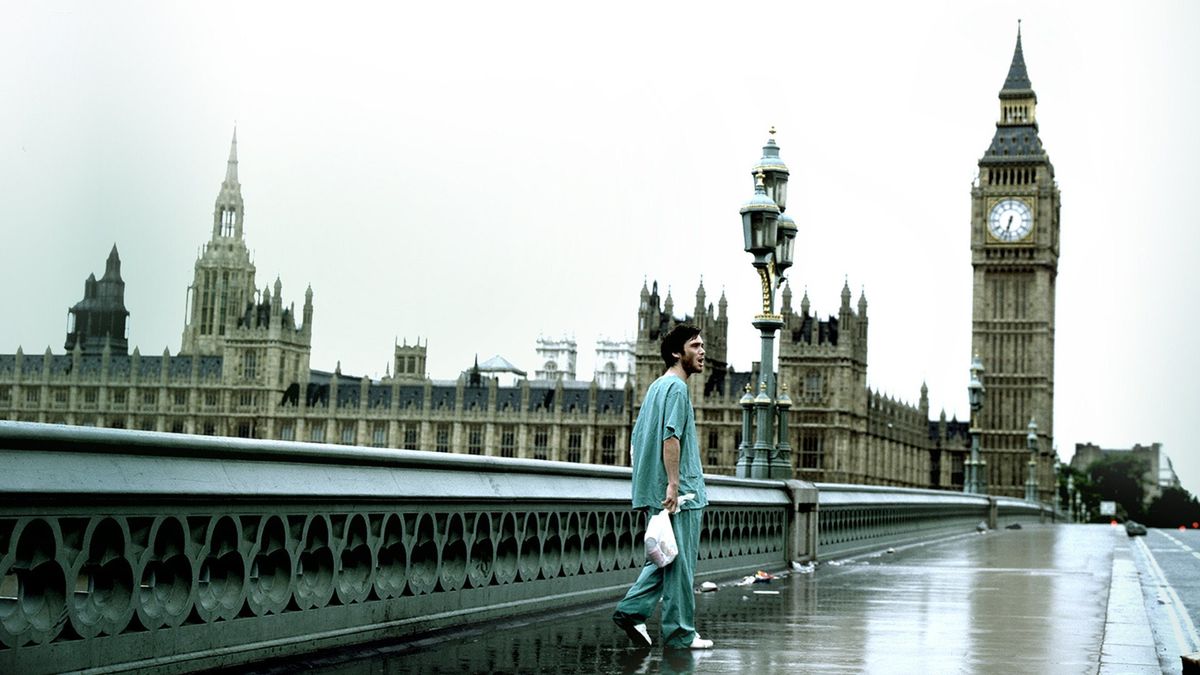 In the sequel, 28 Weeks Later, we see family bonds destroyed in the aftermath of the zombie invasion.  Robert Carlyle plays the spineless father who abandons his wife and then betrays his children. The authorities try but ultimately fail to restore order to a broken country.  It’s a hopeless scenario and makes me wonder if our attraction to such films shows that as a society we too have given up hope for a better future.  Perhaps we feel the old building blocks such as the family, religion and the state have little to offer us any more.  At the end of the day we are alone.  Whether we sink or swim depends on our personal resilience.

The world has always been an uncertain place but since 1945 when the U.S. dropped two nuclear bombs on Japan, supposedly to end World War 2, mass destruction of the human race has become a real possibility.  Historically, warfare used to be a localised affair, armies fighting in trenches or on battle fields.  Civilian deaths were incidental and on a comparatively small scale.  Nuclear weapons have changed everything.  We now live with the constant threat of annihilation over which we have no control.  Perhaps watching zombie films allows us to play out these fears.  They are like nightmares, exorcising the terror we keep tightly zipped up in our waking minds.

Its ironic that for the first time in human history we live with the real risk of sudden death from nuclear war while at the same time we know nothing of the reality of the death experience.  Death is something that happens unseen in hospital wards, in war or famine zones viewed remotely on the TV news.  How many of us have actually seen someone die?  How many of us have touched a dead body?  Death is a taboo subject.  Our ancestors did not share this distaste.  Deceased family members were on display in front parlours where everyone would say their goodbyes.  People died in the street from epidemics and poverty, witnessed by all.  Public executions were a big day out with hot pies for sale and old ladies knitting on the front row while heads rolled.  Death was not such a sanitised affair as today.

So perhaps another reason zombies are so popular in modern culture is that they symbolise the death experience.  We see lots of gore in these films:- the dead re-animated, rotting corpses, limbs torn apart, guts unravelled, zombies chomping into brains, zombies decapitated by survivors.  Zombie movies are not for the squeamish and therein lies their attraction.  We are allowed to view death in close-up on the screen.  We are allowed to confront our secret fears knowing that it’s not real and when the film is over we will sleep warm and safe in our beds.

I am a writer and artist based in the remote north of Scotland. View all posts by nikitashackleton