This weekend I discovered the most marvellous novel that I’d never heard of before. Its called The Wall by the Austrian writer Marlen Haushofer, first published in 1968. Although classified as science fiction and ecofeminist it is really a profound philosophical meditation on solitude and the relationship between humans and the natural world. It contains beautifully intense descriptions of the close bonds that we can form with animals without being sentimental. The story is set in the Alps and recounts in diary format one woman’s struggle to survive in total isolation. The mysterious transparent wall that appears over night is a metaphor for the divisions between us all in a time when we interact with screens more than other living beings. The book was ahead of its time in anticipating many social and environmental issues we struggle with today. The Wall is one of the most powerful novels I have ever read and I would absolutely recommend it particularly if you are a person with a love for animals and nature.

The dazzling and bold Rush of Lava Flowers by Lydia Popowich can be bought here:-

If you have enjoyed the poems on this blog then you will love The Rush of Lava Flowers by Lydia Popowich. Her poetry collection explores the subjects of migration, family and hereditary trauma. There is love, tragedy and above all, hope in these confessional poems with a surrealist twist. Buy it now on Amazon.

Unmute yourself by joining The Buzzing Book Club. Meetings take place via Zoom on the first Thursday of every month at 7pm (GMT). Members take turns to choose the book.

Places are limited. This is a small, informal, lively group. If you would like to join us please get in touch with me in advance through the Contacts Page. Hope to see you soon!

Unmute yourself by joining The Buzzing Book Club. Meetings take place via Zoom on the first Thursday of every month at 7pm (GMT). Members take turns to choose the book.

Places are limited. This is a small and lively group. If you would like to join us please get in touch with me in advance through the Contacts Page. Hope to see you soon!

In the topsy turvy world of the Pandemic where social distancing is paramount, the news media and politicians are broadcasting from their home environment either by Skype, Zoom or other technological wizardry. This is fascinating as instead of a neutral studio backdrop we get a glimpse of the real personalities behind the public image. Or do we?

The funny thing is the majority of such broadcasters are careful to arrange themselves in front of their vast book collections reminiscent of a city library with thousands of resplendent volumes on custom-built floor to ceiling shelving. It’s as if they have to prove to themselves and to the audience just how intelligent and ‘expert’ they really are. I would love to know how many of those books they  have actually read and digested or are they merely status symbols signalling their supposedly superior social class. The tasteful middle class interiors with designer accessories  and original artworks are a universe away from the average person’s home, that is if they’re lucky enough to have a home at all. I have yet to see an ‘expert’ speaking from a cluttered bedsit or a small kitchen with dishes draining by the sink. Perhaps we would trust these people more if they showed their human side. They’re keen to prove how intelligent they are but books are not the only marker. There’s something called “common sense” which has fallen out of fashion in recent years. And there are different types of intelligence, not just the academic sort with its focus on science and rational thinking, there is also emotional intelligence, the intelligence of direct experience. There is intuition, gut intelligence, survival instinct, body intelligence.

According to Howard Gardener, the American developmental psychologist there are nine different types of intelligence, all equally valuable. Which one are you? I am probably a cross between interpersonal and existential but perhaps that’s something for someone else to judge.

So back to the Pandemic crisis…perhaps we would be coping better with defeating Coronavirus if we relied on people with different perspectives on life, different skills and different types of intelligence. A footballer, a psychotherapist, a musician, a poet, a plumber, a mother of six, a gardener..they all deserve the same respect. Their insights and skills are just as useful as any so-called expert with an impressive book collection and a David Hockney on the wall.

“I like talking to a brick wall- it’s the only thing in the world that never contradicts me!”

“Reading gives us some place to go when we have to stay where we are.”

From screenplay to poem-play….

Get Carter, the exorcist out

My first experiences of poetry happened early in childhood.  My maternal grandfather wrote a poem for me each year to commemorate my birthday.  It would be penned carefully on the back of his birthday card.  I am sad today that I did not keep these special tokens of his love.

My first poetry book was A Child’s Garden of Verse by Robert Louis Stevenson.  A beautiful blue leather bound copy with gilded page edges was presented to me at Primary School as an Attainment Prize.  I was nine years old.  Again it reinforced the idea that poetry was something precious.  I began to write my own poems.  I recall a gem that began with the lines, “I was playing in the dairy/when I first saw the fairy”!

At the age of sixteen I was initiated into contemporary poetry (together with sex) by my Glaswegian boyfriend.  He introduced me to the music and poems of Leonard Cohen.  As a Christmas present he bought me a little book of his poetry and I still have the battered copy on my bookshelf.  Cohen’s poetry is often overlooked as he is best known for his songs.  I like his short poems which seem to have a mysterious  double meaning.  Here is one of my favourites called I Heard of a Man:-

I heard of a man
who says words so beautifully
that if he only speaks their name
women give themselves to him.
If I am dumb beside your body
while silence blossoms like tumors on our lips.
it is because I hear a man climb stairs and clear his throat outside the door.

I read Cohen’s romantic and political poems over and over again, learning some of them by heart.  At the time I had no idea poetry would become such a vital element of my life as it is now.  For me, poetry is therapeutic but more importantly, a way to communicate difficult emotions and experiences to others.

What were your first tastes of poetry?  Were they positive or negative?  Did you learn poems by rote in the classroom?  Or did your parents read to you?  Do you remember your first ever poetry book?  I would love to hear how you were initiated into the wonderful world of poetry. 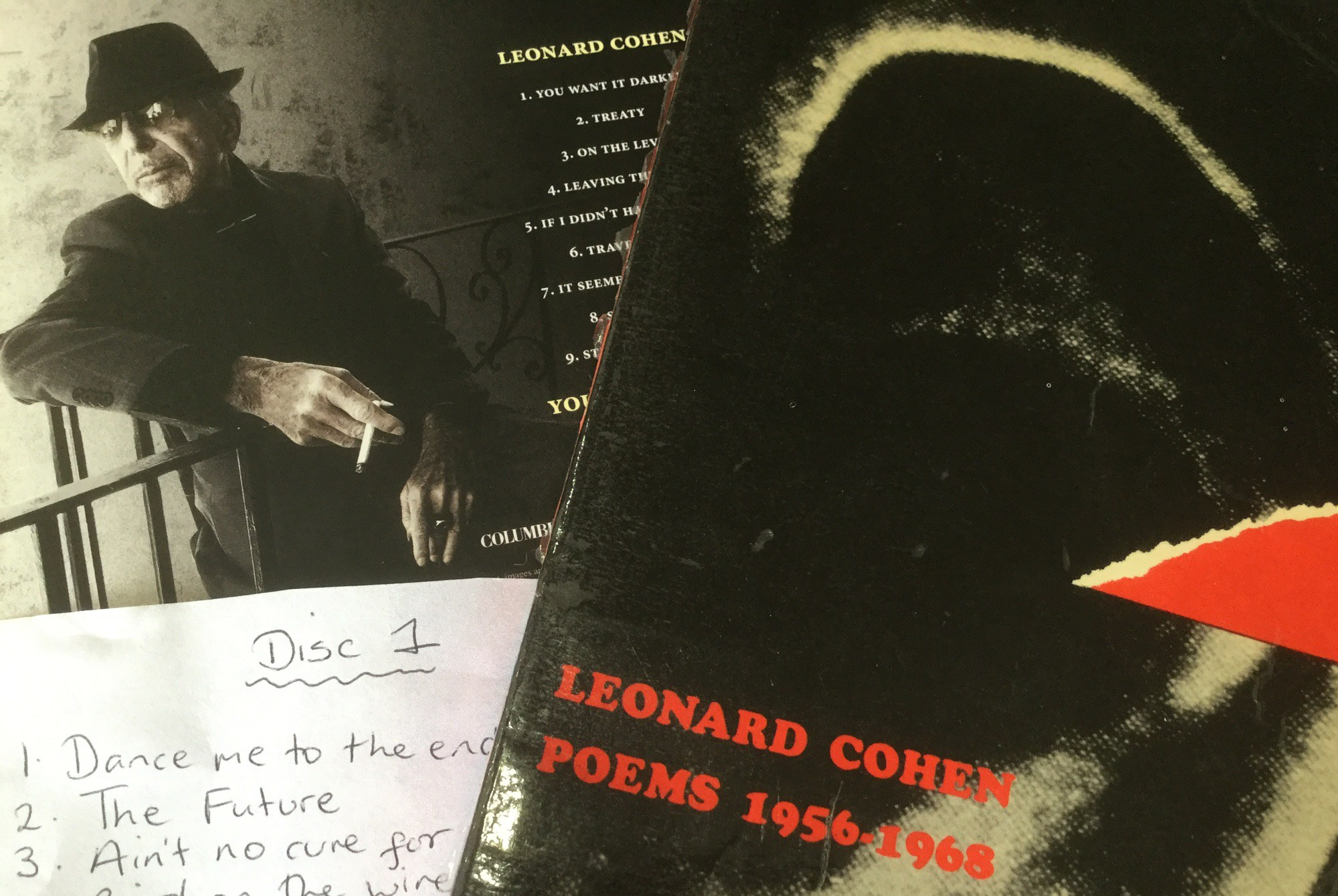 And here is a YouTube video of Leonard Cohen singing one of his most famous and poetic songs:-