Every time I stop at a petrol station I ask myself the same question; how can an entire modern civilisation be built on a finite, flammable liquid that relatively few people control and that’s in short supply?

Hope you enjoy my photographs that show the changes in Petrol pump design from the sixties to the noughties.  Note the switch from gallons to litres and the introduction of unleaded.  I took the pictures at disused filling stations in Northern Scotland.  Can you spot the bird’s nest?  Would a bird be faster than an Esso ‘tiger in your tank’?  Someone should do research!

In the final shot I liked the spectral polythene sheeting shredded and flapping in the wind which often reaches 70 mph in the Flow Country.

In the first shot I was drawn to the signs of corrosion and nature taking over.  Turquoise and orange were fashionable colours in the sixties.  The fourth picture shows purple pumps, a colour that is still popular today…the trains and bus shelters are all purple (or the colour of Scottish Heather perhaps!)

I was fascinated by the weird shapes of these oil drill bits I saw discarded at the site of an onshore oil well in Northern Scotland.  They remind me of alien seed pods from a sci-fi film!   The drill bits were originally diamond tipped and cost thousands of pounds each.  They were quickly worn out by the toughness of the granite. 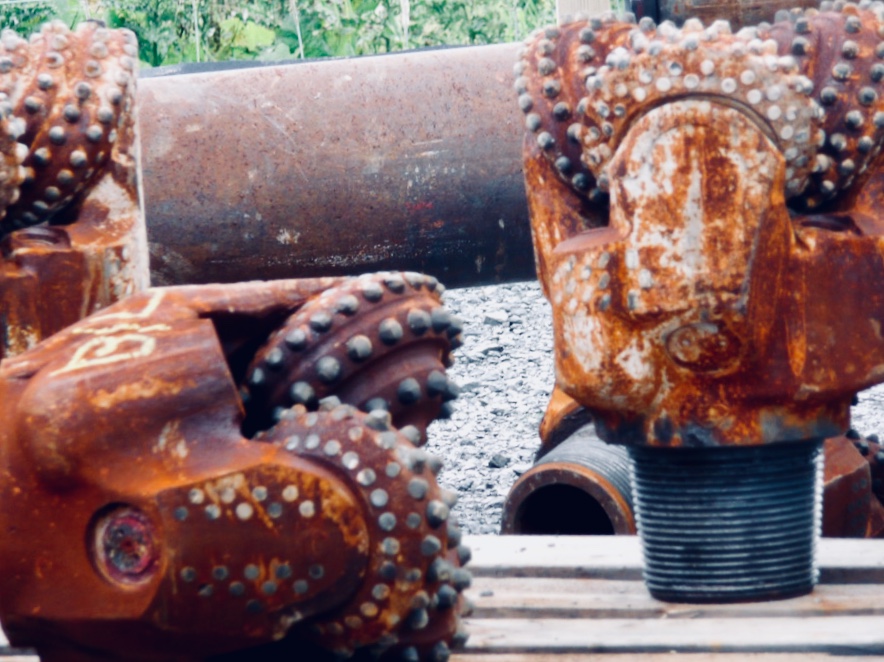 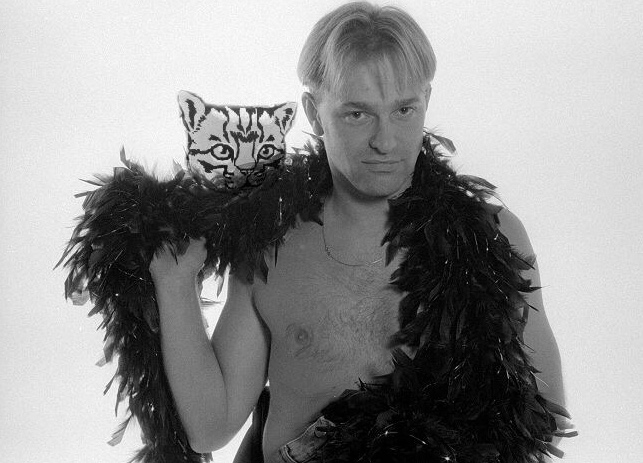 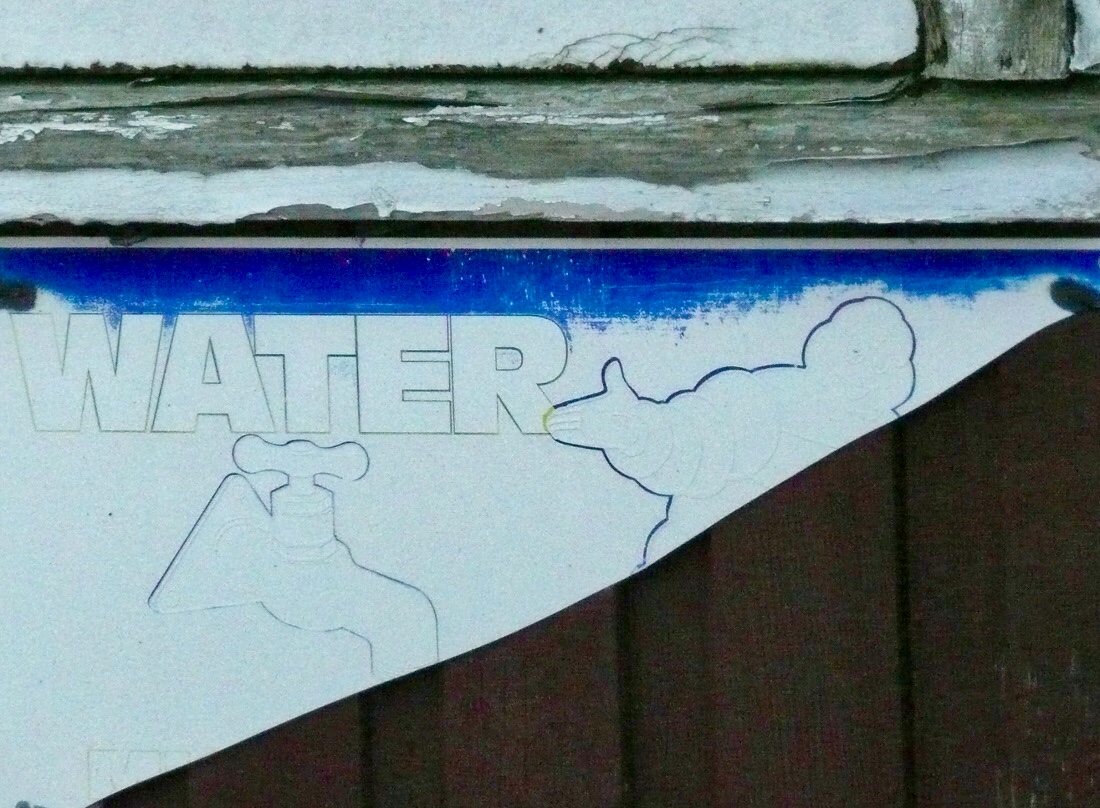 Cars have always played a positive role in my life so the inevitable news that petrol and diesel cars are to be banned in the UK from 2040 fills me with nostalgia.  Of course it’s an essential step towards decreasing air pollution and global warming but the internal combustion engine will be missed by many of us.  Technology keeps moving on with the advent of electric and self-drive vehicles (the latter being a terrifying prospect when I think how often my laptop crashes).  The traditional petrol car has been a cool cultural icon for nearly a century, a symbol of personal freedom, style and aspiration.  It has featured in many wonderful movies:- Rebel Without A Cause, The French Connection, The Italian Job, The Driver, Thelma and Louise, the list is endless.  Can you really imagine an exciting car chase in an automated electric car?  Would Thelma and Louise make their heroic stance against conformity and authority while sitting passively in a car with no steering wheel? Is this new technology a sinister portent of a future where citizens lose control over their lives?

I grew up in the sixties when petrol was cheap and motoring was a carefree, guilt-free experience.  Cars were affordable even to many working class families and it allowed them to escape industrial towns to explore the countryside and the coast.  Our first family car was a second-hand black Ford Consul.  I remember the smooth, comforting contours.  It felt safe and reassuring long before the compulsory seat belts, inflatable air bags and zero tolerance of drinking and driving that we take for granted today.  We lived with a certain amount of risk and people didn’t stress about all the horrible possibilities of what might happen.  That said, there were far fewer cars on the road and people were more respectful of each other.  No-one had ever heard of road-rage.

Nearly every summer weekend we would pack up provisions and our little orange tent and head for the seaside together with numerous friends. In the cooler months we would go for long drives around the countryside and have picnics in the back seat or bravely shivering in a lay-by.  We couldn’t afford garage repairs so my father maintained the car himself and took great pride in his immaculate standards.  It was typical for many working class men to repair their own cars.  Before the digital era and the concept of built-in obsolescence it was relatively easy to replace parts.  Our Ford Consul lived to a great age and was eventually sold on.  We replaced it with a two tone, blue and cream Humber Sceptre with curvaceous chrome trims and sculpted wings.  My father was devastated when the bodywork  was damaged in a minor scrape with a dry-stone wall.  He took to his bed for a week and didn’t speak or eat.  The car had to be scrapped because he couldn’t find a replacement panel.

Now I live in a remote rural area where once upon a time there was a petrol station in every village.  Like the village shops,  the petrol station was a focal point for the community, enabling human contact and the exchange of information.  Buying petrol used to be fun.  There were free gifts such as drinking glasses,  (I still have one chunky tumbler at the back of my cupboard!), coasters, sunglasses, sweets, posters.  As a little girl I remember being thrilled with a free kite.  In the UK there were Green Shield stamps, paper tokens you were given with petrol purchases that you collected and glued into a book.  The books were exchanged for gifts at a Green Shield Centre.  Petroleum companies had jolly slogans such as ‘Put a Tiger in Your Tank’  by Esso.   All that has gone.  In the eleven years since I moved to this area the few surviving petrol stations have closed.  The only remaining one is part of a large supermarket chain.  We now have to drive over fifty miles to obtain fuel and you need to plan ahead.  Life is becoming more difficult and more isolated.  There are no local jobs selling petrol, work that suited many women and students as it was part-time.

It’s sad to see the derelict petrol stations at the side of the road.  In recent years I’ve photographed the decaying buildings, old signs and rusting pumps.  Grass and weeds are reclaiming the former concrete forecourts.  I find them bleakly beautiful.  Many of the old designs had an Art Deco influence.  Will the new electric charging points of the future have the same sense of design? I fear not. The future is less concerned with aesthetics and humanity. There will be no-one to chat to about the weather when you plug your car in to an impersonal machine.

So I hope you enjoy my photographs of the bye-gone petroleum era entitled Ignition Switch.  There are more to come.

And if you are a bit of a petrol-head or have any memories to share of motoring experiences in the past I would love to hear them.  Please leave a comment.  Times must change but sometimes you can’t help wishing they would stay the same!